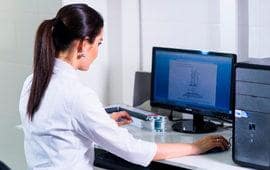 The device for determining the impact resistance must meet the following requirements:

Tests of window sills are carried out on samples of the profile of the board with a length of (100 ± 2) mm.

4. The procedure for conducting the test.

The sample is removed from the refrigerating chamber and placed on supports in such a way that the surface of the profile operating in operational conditions outside the building is subjected to the test.

The profile should be positioned in such a way that the strike of the striker falls in the middle of the chamber.

The tests are carried out no later than 10 seconds after the sample is removed from the refrigerating chamber.

When testing window sills, the height of the drop of the striker is allowed to be set 700 mm.

The sample is considered to have passed the test if, during visual inspection, cracks, destructions, and peeling of the finishing coating are not found on its surface. Dents on the surface of the sample are allowed at the point of impact.

The test result is considered satisfactory if at least nine out of ten tested samples have passed the tests.

No comments to show.